Pickleball for All, Says Goleta Council 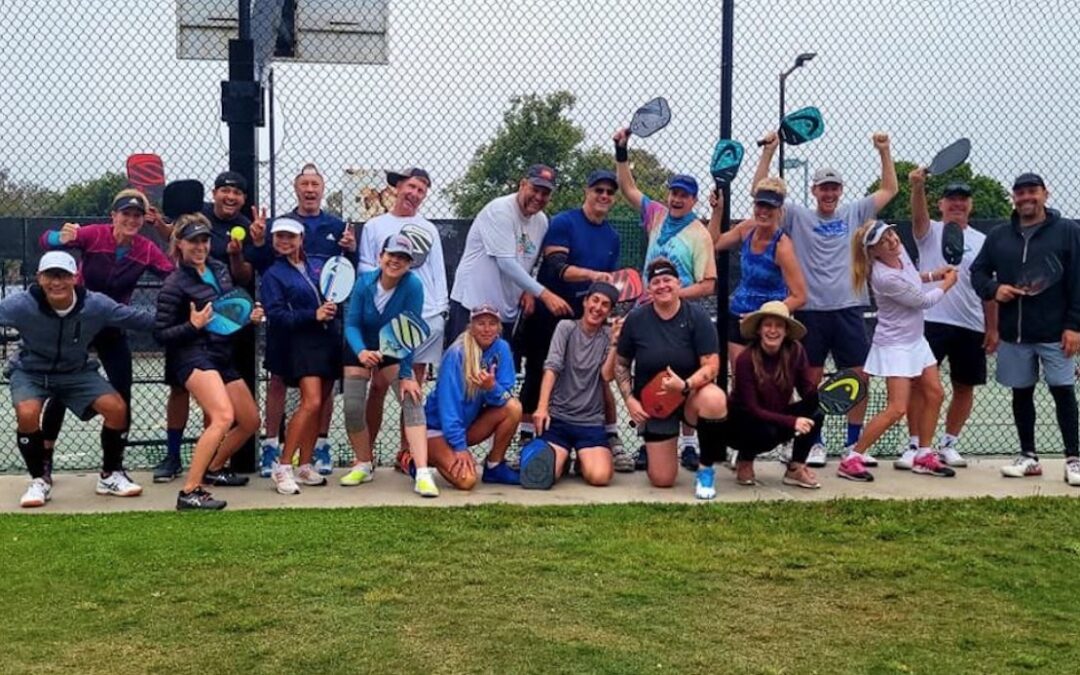 Pickleball is a fast-growing sport, but noise and potential inequities of a paid reservation system put permanent courts on pause at the Goleta Valley Community Center. | Credit: City of Goleta

This article republished by the Santa Barbara Independant

Pickleball came about on a lazy summer afternoon on Bainbridge Island when Joel Pritchard, then a U.S. congressmember for the State of Washington, came home from a golf game to a house full of bored families. He and his friend Bill Bell got everyone over to a badminton court for a game they made up using ping-pong paddles and a wiffleball — 56 years later, in the midst of the socially distanced, it’s-safer-to-be-outdoors COVID pandemic, pickleball caught fire, including in the City of Goleta. There, the “wock wock wock wock wock” of balls and paddles and the loud banter of players either animates the enthusiasts courtside or annoys the neighbors of the Goleta Valley Community Center.

The two factions came together at the Goleta City Council on Tuesday night in a lengthy session that was capped by a quick approval of $600,000 for a fish project at neighboring San Jose Creek. The pickleball discussion was preceded by more than 400 letters, emails, and phone calls to the council and to the Parks & Recreation Commission, which had met in November to discuss painting lines for permanent pickleball courts at the Community Center. All but four of the missives were in favor of the idea, and the letters in opposition tended to imitate the sound the writer endured. More than 30 of the positive letters came from neighboring business owners or homeowner associations.

General Manager Charlie Johnson explained to the council that pickleball had brought the area to life and that the players had raised $18,000 through fees and another $35,000 through tournaments and clinics over the past 18 months. The funds went toward improvements, such as adding chainlink doors to the courts and separating them with fencing, a new windscreen repurposed from UCSB, portable nets, and switching to LED lighting, which has made a huge difference in the electricity bill, Johnson later told the Independent. In a 22-slide PowerPoint, “Pickleball Ambassador” Mike Myers demonstrated to the council that the sport has grown in popularity locally and around the country, announcing that Goleta faced a “pickleball gap” compared to Santa Barbara and Santa Maria. The proposal was to convert the tennis court into four pickleball courts, keep the basketball court and also its temporary pickleball setup, and resurface and restripe the courts. It’s the only set of pickleball courts in the city with lighting, and pickleball players can get on court from 8 a.m. to 8:30 p.m.

Despite the heartfelt enthusiasm of the public — who wrote and said that they’d made friends, lost weight, gotten outdoors, and begun to spend more time and money in Old Town and its shops and restaurants — the question on councilmembers’ minds was whether the fee system being proposed was fair. No other recreational use at Goleta’s parks carried a fee; Girsh Park might charge leagues for use of the soccer or baseball fields, but not individuals, they noted. The Community Center itself was charged a token rental fee by the city of $1 per year.

Johnson had explained that the pickleball membership fee of $60 a year gave members access to the reservation system for the courts — with Omicron in the air, they didn’t want players lining up to wait for the next available court. Alternatively, anyone could pay $2 for two hours on the court during drop-in times on weekdays. Johnson told the Independent that the drop-in fee was on the honor system at the courts or via an online reservation system using Venmo.

James Kyriaco, a councilmember who lives in Old Town, said he’d chatted with six teens taking turns playing pickleball at Jonny Wallis Park. He asked if they’d ever played at the Community Center? “A couple of the kids gave me a look, like they didn’t want to say. Then one finally spoke up and said, ‘Don’t you have to have a password?’” Kyriaco felt that they needed to make it known to the kids in Old Town that the Community Center courts were for them, too.

Sign up for Indy Today to receive fresh news from Independent.com, in your inbox, every morning.

“I want a commitment from whoever’s running the program that they will make it more accessible,” he insisted, adding that charging fees had to go away. He suggested the program add free clinics and drop-in clinics or sandwich boards on the sidewalks in English and Spanish, maybe with a QR code, in order to bring the community in.

While Councilmember Stuart Kasdin agreed that charging to use the courts was not a good idea, he considered a study of the idea, as well as a “pickleball free” no-noise curfew for residents, was necessary. Councilmember Roger Aceves opined that a report on funding needed to look at the costs of the pickleball program, consider any potential liabilities, and find a solution to the noise problem — Johnson had said a sound barrier on the existing fencing could cost $34,000 or more.

By then, Mayor Paula Perotte noted that the clock was nearly at the council’s 10 p.m. ending time and that they still had the San Jose Creek item to go. Aceves asked for a date of late February or early March for the report, to which everyone agreed.

The council then switched gears to just a few hundred feet away from the Goleta Valley Community Center, where San Jose Creek anchors the mid-section of Old Town. The concretized creek channel is integral to three projects with time-tied grant and permit applications, explained Public Works Director Charlie Ebeling: the Ekwill-Fowler streets extension, the Hollister Avenue bridge rebuild — for which the city has a $38 million grant in the works — and the San Jose Creek Channel Fish Passage Modification Project. That last required $665,000 from the city’s grant general fund for the preliminary design phase, and a $350,000 contract with Northwest Hydraulic Consultants for modeling of the redesigned fish passage channel. Consulting engineer Gerald Comati explained that the grades of the creek channel presented “immense challenges.” Not only would the improvements help the fish and reduce the city’s maintenance, but they were a requirement of the Hollister Avenue bridge permit from Fish & Wildlife. The request was approved unanimously by the council.

Construction of the updated fish passage might be in a year or two, leaving time to look for grants, Comati noted. The pickleball courts, on the other hand, are open now with temporary striping and nets, which may become permanent in a few months’ time if funding and enthusiasm stay lively.

Correction: This story was corrected to reflect more accurately the fees collected and their uses in the past 18 months.